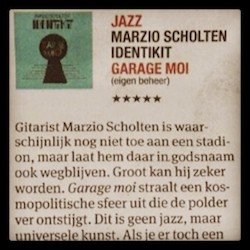 Garage Moi has only been out for a few weeks but already the response and kind words by fans, family, friends and press all over the world has been overwhelming! Garage Moi received the maximum of five stars (*****) in Dutch newspaper Het Parool, stating: “This is not jazz, this is universal art”. De Volkskrant rated Garage Moi with 4 stars (****) out of 5, calling it an “exhilarating record”. The influential Japanese blog Tokyo Jazz Notes wrote a rave review and American blog Nextbop wrote: “It really is an impressive album that rises above the sea of albums that seem to drop constantly”. Stay tuned for more review updates!

Next post: Happy Holidays – Here’s To Hard Work And Believing