Another fresh year of music and creating is ahead of us. 2017 ended with a nice run of shows with my Americana Trio and Norwegian trumpet player Hayden Powell. Also I was featured on the Dutch national television show Vrije Geluiden, where I did an interview and played two songs. 2018 started great with a very nice mention on the New York based music blog Bird Is The Worm. And there’s lots of great stuff coming up this year: new acoustic solo music as a follow-up to last year’s We Never Left Town, new music by IDENTIKIT and I’ve started as a coach for Cultuur+Ondernemen. More about all of the above soon. So have a great new year and thanks for supporting!

Dutch tv broadcasting network VPRO invited me to play a few songs on the rooftop of their building. I played ‘Heartland’ from ‘We Never Left Town’ and a new song called ‘Taking Down Our Flags’. The video was shot and directed beautifully. Enjoy! 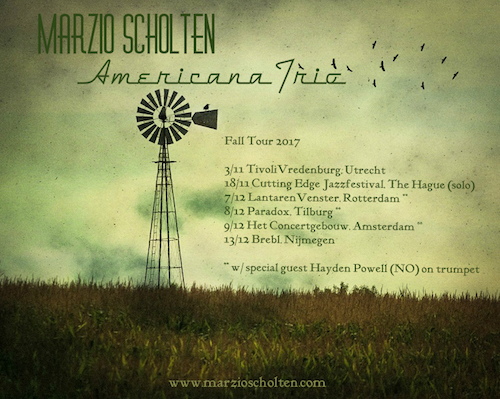 Hi there! Just a quick message from the headquarters. This fall we have a few nice concerts with the Americana Trio lined up for you. On three of these dates (+) we will be joined by Norwegian trumpet player Hayden Powell. And one of these dates is a solo guitar show! WHAT?! Check out the tour schedule below.

Coming December the Americana Trio will perform at three of the nicest venues of the Netherlands. But wait, there’s more… we invited Hayden Powell from Norway as our special guest on trumpet. It’s going to be terrific! Get your tickets now: